I was warned when I arrived to Thailand by our former farm manager: insects in the soil here eat up all tubers.  I totally believed him, but I still wanted to try.  I have successfully grown potatoes in my frontyard back in the states  in 15-Gallon containers. I have also tasted the difference between home-grown and store-bought potatoes.  Also, the vast amount of produce grown in Thailand and Burma is produced with the use of chemical fertilizers calling into question their safety.

After doing a little research on above-ground potato farming, I decided to use old tires. The risks of metal and chemical release seem negligible when used in small doses as we would do.  Also, should this process be a success, obtaining used tires would be no problem for any local farmer.

The growing process is simple.  Start with four similarly sized tires.  I like to drill holes along one corner to allow for drainage.  Cover the bottom of first tire with a layer of plastic, then cover that with a 1-2 inch layer of soil.  I used a mixture of farm dirt, rice straw, compost and worm castings.  Then add your spuds.  Many sources recommend to cut your potatoes at least two days ahead of time, keeping at least two eyes on each cutting.  In tires, three is the maximum amount of seeds you’ll want to plant.  Cover the spuds with no more than six inches of soil mixture.  Water and wait.  As the potato shoots reach about 6 inches out of the soil add more mixture being careful not to cover the leaves.  Repeat this process until your container is full, at which point you only need to wait for the shoots to flower and then dry.  At this time, your potatoes should be ready to harvest.

Our first attempt at tire-potatoes was a complete failure. I had cut the potatoes as most sources say to do.  I waited two days for the potato to have time to form a protective layer over the cut, but it wasn’t enough time.  They turned to mush and didn’t produce.

On the second attempt, I chose not to cut.  This time the potatoes grew quickly.  As the potato shoots grew, I would add soil so that they didn’t flower too quickly (flowering signals the end of the growing cycle and limits the time the tubers have to grow).  Sadly, the shoots started to die due to bending from soil application and from the heat.

On my final attempt, I used a different variety of potato, one that is more popular with the Burmese population.  I started with just two potatoes.  They grew quickly just like the second attempt.  Their life cycle persisted longer.  I was sure that this would be the successful attempt. 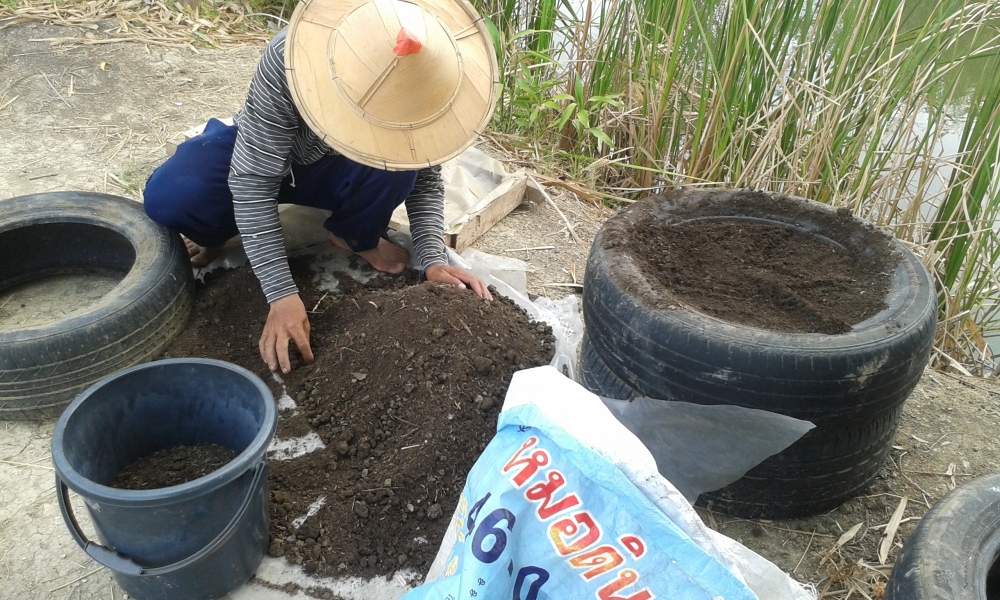 Once the potatoes shoots had dried out, I gave them another month.  The other day, I went to begin harvesting and was surprised to find a large amount of earthworms. About 85% of the soil was now changed into worm castings.  At that point, I considered the entire endeavor a win since our worm casting levels were nearly depleted.

We continued to dig.  About 1 1/2 tires down, there were no more earth worms, no potatoes either, but plenty of castings.  At this point, I didn’t expect to find any spuds.  However, as we emptied out the last tire, we found a small handful of smaller sized potatoes, perfect for seeding.  They looked very healthy too, with no signs of insect invasion.

In the end, I’m not sure that above-ground potato farming may be very productive for us in Maesot, Thailand. More testing is required, but the recent results show promise for dual-benefits both as a potato and vermaculture project.  Also, the resources of materials and time are negligible and can easily be incorporated to any farm and schedule.  Future testing will require little effort and offer minimal distraction from other projects on the farm.

Moving forward, we’ll be sure to add earthworms to any larger containers we use in the future.  We encourage our readers to do the same.  Besides the added benefit of aeration for your crop, the leftover soil is ready for potting and planting projects when you’re done with that crop.

Safety note: potatoes are a member of the nightshade family.  Never eat the plant part of the potato and cut off any green areas of the tuber; they contain a toxin that causes agitation to the gastrointestinal system and, consumed in high enough amounts, have been reported fatal.